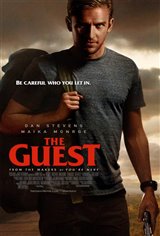 A mysterious and charming stranger named David (Dan Stevens) arrives at the home of a bereaved family, claiming to be the best friend of their dead soldier son, Caleb Peterson, who died in Afghanistan.

David claims to have served alongside Caleb and says he has a farewell message for them. The Petersons quickly warm to him, despite never having heard of David. Caleb's sister Anna (Maika Monroe), however, doesn't trust him.