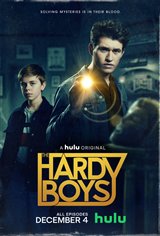 When their mother is killed in a car accident, Frank (Rohan Campbell) and Joe Hardy (Alexander Elliot) are sent to Bridgeport for the summer to live with their aunt Trudy (Bea Santos) while their father tracks down a missing person in Europe.

Living in the town where both of their parents grew up, Frank and Joe run into a number of people who knew their mother — and are vague about her and the fact that she was in Bridgeport on the day that she died. They begin to investigate and discover their mother was actually murdered — and their grandmother may be involved.

Based on The Hardy Boys book series by Franklin W. Dixon.