The Haunting of Bly Manor (Netflix) 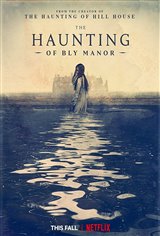 Henry does not live at Bly Manor, and refuses to know any updates on the kids' well-being. He leaves the au pair with the kids, alongside the estate's chef Owen (Rahul Kohli), groundskeeper Jamie (Amelia Eve) and live-in housekeeper, Hannah Grose (T’Nia Miller).

But the manor has secrets of its own, and late at night souls haunt the manor, leaving muddy footprints on the floor. Dani soon learns about her predecessor, Rebecca Jessel (Tahirah Sharif), and Henry Wingrave’s former business associate, Peter Quint (Oliver Jackson-Cohen).

Centuries of dark secrets of love and loss are waiting to be unearthed in this chilling gothic romance. At Bly Manor, dead doesn’t mean gone.

Based on the Henry James novella The Turn of the Screw.