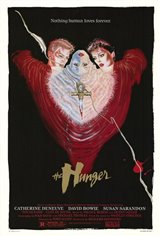 To sustain their sanguinary requirements, the pair cruises New York nightclubs in search of victims (as illustrated in a stunning opening sequence to the accompaniment of Bela Lugosi's Dead performed by seminal Goth band Bauhaus).

When John awakens one morning to discover telltale signs of aging, it is revealed that his own sustained youth is not permanent, and his physical decrepitude begins to increase at an incredible rate.

In a panic, John visits the clinic of scientist Sarah Roberts (Susan Sarandon), who has recently published a book on reversing the aging process, but she initially dismisses him as a crank, leaving him to sit in the lobby for several hours... during which his body ages several decades. After learning of his condition, Sarah traces John to his uptown flat.

John is nowhere to be found, having been consigned by Miriam to a box in the attic with her legions of undead loves, leaving Miriam to deal with Sarah -- which she does quite effectively, seducing her into a steamy lesbian tryst. Their passion is consummated by a mingling of Miriam's blood with Sarah's, which later manifests itself as a psychic link between the two women and leaves Sarah with a rapidly-increasing appetite for blood.