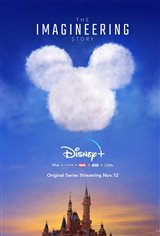 Academy-Award nominated filmmaker Leslie Iwerks leads viewers on a journey behind the curtains of Walt Disney Imagineering, the little-known design and development center of The Walt Disney Company, to discover what it takes to create, design and build 12 Disney theme parks around the world.

For nearly 70 years, a unique blend of artists and engineers have cultivated an impossible notion from the mind of one man, Walt Disney, into a global phenomenon that has touched the hearts of millions. These designers are called Imagineers.

The story of Walt Disney has been told. But the story of Imagineering lies deep within the essence of Disney, starting with its founder, Walt himself.

Narrated by Angela Bassett, this six-hour series chronicles its history—from the words of the designers themselves and through never-before-seen archival footage, the viewer discovers who made these places and why.