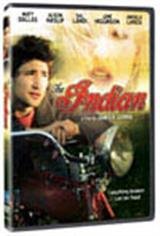 A buried 1917 Indian motorcycle brings together the rebellious Danny (Kyle XY's Matt Dallas), his negligent father (Sal Landi) and Shelby (Alison Haislip), a young and beautiful mechanic. Despite past wounds, the three work together to rebuild the busted bike and overcome their personal demons.

Review: Matt Dallas is terrific as Danny, a boy who lost his mother when he was three and was abandoned by his father. Now 17, he has no friends, no social skills and is in trouble with the law. His father, who's ill and needs a kidney transplant to survive, shows up. Though some scenes could have been shortened or cut out altogether, first time director Gorrie shows promise and he had a great cast to work with. It's fascinating to watch the auditions and see what choices good actors make in order to win a part. It's hard to understand why DVDs rarely include the movie trailer—it should be included on every DVD, as it is here. The numerous extras are a treat—every movie should offer auditions and interviews, they make for great viewing, especially when you enjoy a movie and are intrigued about what goes on behind the scenes. 4 1/2 stars out of 5.