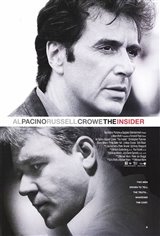 Based on a true story, the producer of the TV current affairs show 60 minutes, played by Al Pacino, and the show's on-air star, Mike Wallace, played by Canadian Christopher Plummer, work to uncover malpractice in the tobacco industry.

After convincing a bribed scientist to "spill the beans" to them on camera, they are forced, by the parent company of CBS (Westinghouse) to make sure that the episode does not air.