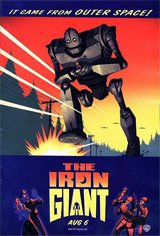 The Iron Giant follows the incredible adventures of young Hogarth Hughes who late one night discovers and befriends an enormous robot fallen from the stars.

But Hogarth now has a very big problem: how do you keep a 50-foot-tall, steel-eating giant a secret -- especially when there's a nosy government agent asking questions in town and the combined land, sea and air power of the U.S. military mobilizing to demolish the "alien invader?"