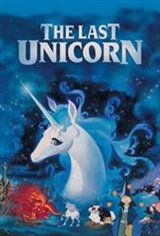 In this animated feature set in medieval times, the last unicorn (Farrow) on Earth seeks the whereabouts of her fellow species. But soon after leaving the safety of the forest, she finds nothing but trouble. Along the way, she is joined by a bumbling magician, Schmendrick (Arkin), and a sensible-minded woman, Molly (Grimes). Things seem at their worst when they are attacked by a flaming bull and Schmendrick decides to hide her by changing her into a human being.