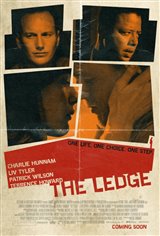 In this race-against-time thriller, the opposing philosophies of two men embroiled in a complicated love triangle with a beautiful woman (Liv Tyler) escalate into a lethal battle of wills. Ultimately, the believer (Patrick Wilson) forces the non-believer (Charlie Hunnam) onto the ledge of a tall building. He gives him one hour to make a choice between his own life and someone else's, while a policeman (Terrence Howard) tries to convince him to come down from the ledge.

Without faith in an afterlife, will he be capable of such a sacrifice? THE LEDGE is a nuanced character study of love and conviction that will force you to ask how far you'd be willing to go for what you believe in.