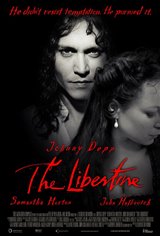 346 votes and 31 Reviews | Write a Review   Watch Trailer
The scandalously decadent John Wilmot (Johnny Depp), second Earl of Rochester, is drawing acclaim with his daring writing and raising eyebrows as a gifted rogue with a lascivious lifestyle. A close confidante of the high-living King Charles II (John Malkovich), the Earl delights in lampooning England's roayls with his subversive wit and scandalizing London society with his sexual escapades -- all the while reveling in getting away with anything he can.

But when the Earl falls in love with the brilliant and fiercely independent Elizabeth Barry (Samantha Morton), the theatrical protégé he plans to turn into England's biggest star, their affair and a subsequent betrayal will be the start of the Earl's plunge from the heights of social celebrity to the depths of ruin, as he seeks his final redemption.