The One and Only Ivan (Disney+) 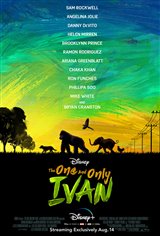 A gorilla named Ivan (voice of Sam Rockwell) lives in a mall with other animals, including an elephant named Stella (voice of Angelina Jolie) and a stray dog (voice of Danny DeVito). They perform in a circus housed within a mall, where Ivan is the headliner. The circus is owned and run by Mack (Bryan Cranston), a kind man who raised Ivan from a baby.

When ticket sales decline, Mack brings in a new headliner — a baby elephant named Ruby (voice of Brooklyn Prince). Stella worries about Ruby, who has never known freedom. Even though the animals are treated kindly, they live in captivity in the back of the mall, surrounded by cement and iron bars. They're not happy, so they try to come up with a solution as they dream of one day being free and living outdoors.