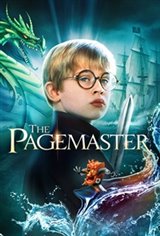 A young boy overcomes his obsessive fears by discovering a love for books in this animated fantasy adventure. In a live action wraparound, Macaulay Culkin stars as Richard Tyler, an easily bullied, nervous wreck of a kid who's an expert on safety statistics.

His mother and father (Mel Harris and Ed Begley, Jr.) don't know how to inspire their son to embrace life boldly. Barely able to leave the house, Richard ventures out one day, but he gets lost in a storm and ends up at a mysterious library. Inside, he slips, knocks himself unconscious and finds himself in a cartoon realm where books come to life.

Guided by Adventure (Patrick Stewart), Fantasy (Whoopi Goldberg) and Horror (Frank Welker), Tyler experiences the adventures of classic novels such as Moby Dick and Treasure Island, and he even meets some famed fictional characters, such as Dr. Jekyll and Mr. Hyde (Leonard Nimoy).

Through his experiences in the pages of the legendary books, Richard confronts his phobias and learns to face life more courageously. The Pagemaster was directed by Joe Johnston, a former special effects supervisor and production designer who later directed Jumanji (1995) and October Sky (1999).