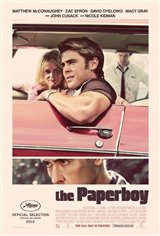 Ward Jansen (Matthew McConaughey), a reporter for The Miami Times hires his brother Jack (Zac Efron), a recent college dropout, to drive him and his writing partner, Yardley Acheman (David Oyelowo) as they investigate a case in a small Florida town.

Charlotte Bless (Nicole Kidman), a strange, beautiful woman who writes to prisoners on death row and falls in love with them, has convinced Ward and Yardley that Hillary Van Wetter (John Cusack) was wrongly convicted of killing a sheriff who stomped Wetter's handcuffed cousin to death. As the investigation unravels, it becomes clear to the brothers that there's more to the story than they first believed, and they soon realize they're on a journey filled with betrayal. Based on the novel by Pete Dexter.