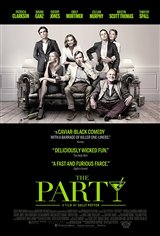 14 votes and 3 Reviews | Write a Review   Watch Trailer
When Janet (Kristin Scott Thomas) is appointed to the prestigious political post of Health Minister in Britain after endless campaigning and road trips, she hosts an intimate gathering for their friends in the Victorian home she shares in London with her dour husband, Bill (Timothy Spall).

When Bill drops a bombshell, it sparks a series of revelations that threaten to unravel the party.