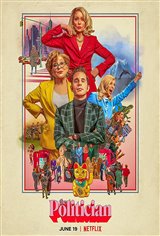 Since the age of seven, Payton Hobart (Ben Platt), a wealthy student from Santa Barbara, has had his life all figured out—he knows he's going to be the President of the United States.

The plan is simple: Get elected Student Body President and then secure a spot at Harvard. But first, he has to outsmart his ruthless classmates in the most treacherous political landscape of all: Saint Sebastian High School.

However, his campaign for student body president hits a snag when his running mate (Zoey Deutch) makes a homophobic slur, and when he’s opposed by another student, River (David Corenswet), who’s handsome, more popular than Payton, and a better public speaker.

The second season picks up a few years later. Payton is now upping the stakes, running for a seat in the New York State Senate against incumbent Dede Standish (Judith Light). Payton's high school campaign team has reunited for the occasion and will do whatever it takes to win.