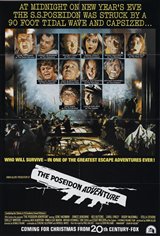 The SS Poseidon, a luxury liner built years earlier, is on her final voyage from New York City to Athens, where she's destined to be scrapped. As passengers gather in the dining room to celebrate New Year's Eve, the captain (Leslie Nielsen) receives a report of an undersea earthquake.

The news comes too late. Although the crew tries to steer the ship away, it's hit by a tidal wave and capsizes, trapping the passengers and crew inside. Knowing that the only way out is up to an outer hull, which is still above sea level, a group of survivors try to make their way out through the galley, led by Reverend Frank Scott (Gene Hackman).

Based on the novel of the same name by author Paul Gallico, the film won two Academy Awards: a Special Achievement Award for visual effects and Best Original Song for "The Morning After."