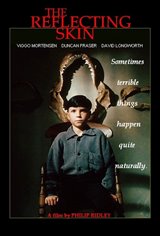 Set in a 1950s-era American heartland of sprawling wheat fields and lonely old houses, The Reflecting Skin is British director Philip Ridley's fascinating and very strange investigation into the horrors of childhood innocence and fantasy.

The film's mixture of gruesome subject matter, morbid sexual perversion, and disarming humor has spawned comparisons to the work of David Lynch, particularly Blue Velvet and the Twin Peaks series. Young Seth Dove (Jeremy Cooper) lives with his mother and father in a ramshackle farmhouse that also serves as the local gas station.

After reading one of his father's pulp horror magazines, Seth convinces himself that Dolphin Blue (Lindsay Duncan), the attractive widow who lives nearby, is a vampire. When Seth's friend Eben is found dead (and sexually abused) in the family cistern, Seth is sure that Dolphin is to blame.

The authorities, however, point to Seth's father, whose secret homosexuality -- and past affair with a young boy -- is a skeleton in the town's closet.

Seth's father refuses to have the affair dragged into public view, and so he burns himself alive at the family gas pump, prompting Seth's older brother Cameron (Viggo Mortensen) to return home from a military tour. Cameron falls for Dolphin, and at the same time he becomes weak and begins losing hair.

Seth takes this as a sign that Cameron is being drained of vitality by Dolphin, although it is suggested that his sickness is in fact due to overseeing A-bomb tests while on a ship in the South Pacific. Meanwhile, a roving gang prowls the country roads in a sleek, black Cadillac, and more children are found dead.

It is not surprising that writer/director Philip Ridley has also published books for children, since watching The Reflecting Skin is a lot like reading a young adult novel, albeit a horrific one. Presented from a child's strangely warped point-of-view, this film should be appreciated by anyone looking for films far outside the mainstream.