The Sons of Sam: A Descent into Darkness (Netflix) 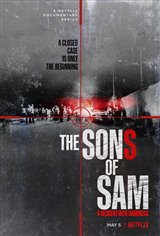 The hunt for the "Son of Sam" in late 1970s New York City gained widespread media attention after the killer left notes for the police, calling himself the "Son of Sam." He murdered six people and injured many others between 1976 and 1977, but following the biggest manhunt ever to take place in NYC to date, David Berkowitz was captured and sentenced to six consecutive life sentences. Although his arrest and conviction brought the nightmare to an end for many New Yorkers, for journalist and Ultimate Evil author Maury Terry, the real mystery was just beginning.

Terry was convinced Berkowitz had not acted alone, and he would go on to spend decades attempting to prove that the web of darkness behind the murders went deeper than anyone imagined—and his pursuit of that elusive truth would eventually cost him everything. The film includes archival news footage, conversations with the people closest to the investigation, and Terry's own words and case files.