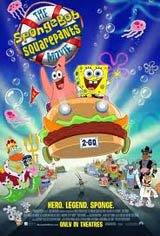 There's trouble brewing in Bikini Bottom! Someone has stolen King Neptune's crown, and it looks like Mr. Krabs is the culprit! Though he's just been passed over for the promotion of his dreams, SpongeBob stands by his boss and along with his best pal Patrick sets out on a treacherous mission to Shell City to reclaim the crown and save Mr. Krabs's life.

The journey takes SpongeBob and Patrick through some of the darker recesses of the ocean floor, including the Thug Tug, a rough and tough establishment where few fish dare to visit, and a freakishly massive monster-filled trench! And all the while the loyal pair are pursued by a relentless hitman named Dennis.

Meanwhile, back in Bikini Bottom, Plankton carries out his evil "Plan 2", designed to help him steal the top-secret Krabby Patty formula and ultimately rule the world! Will our heroes make it to Shell City and back in time to save Mr. Krabs from Neptune's wrath? Will Plankton finally steal the secret formula? Will King Neptune find a new way to disguise his receding hairline?