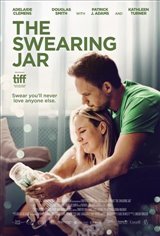 Carey (Adelaide Clemens) and Simon (Patrick J. Adams) are happily married and when they learn they're going to have a baby, they're over the moon. However, Carey decides that they both need to stop swearing before the baby arrives, so she comes up with the idea of a Swearing Jar.

After the baby arrives, Carey, a high school music teacher, meets Owen (Douglas Smith), a struggling songwriter/guitarist who's working as a clerk at a local bookstore. She gets his help to write a song for Patrick's upcoming 40th birthday party, at which he'll also provide accompaniment on the guitar. When Owen develops feelings for her without realizing Carey is married, it creates a complication.

Filmed in Hamilton, Ontario. Several of the cast members are Canadian, including Patrick J. Adams.