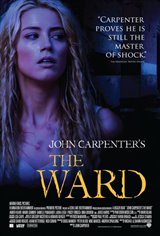 Kristen (Amber Heard) wakes to find herself bruised, cut, drugged and held against her will in a remote ward of a psychiatric hospital. She is disoriented and has no idea why she is there. Other patients in the ward, four equally troubled girls, offer no answers and Kristen quickly realizes that things are not as they seem—and that they are not alone.

One-by-one the other girls begin to disappear, and as Kristen struggles to escape she uncovers a truth far more dangerous and horrifying than anyone could have imagined.