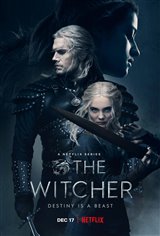 Geralt of Rivia (Henry Cavill), a mutated monster hunter, roams the continent but struggles to find his place in a world in which people often prove to be more wicked than the monsters he finds.

Princess Cirilla (Freya Allan) has to flee the castle when her grandparents are killed in battle.

A farm girl with a hunchback, Yennefer (Anya Chalotra), lives on a pig farm but is sold by her uncaring father to a witch to be trained to be of service.

Geralt runs into elves who were subjected to genocide during a war with humans. Later, he also meets Cirilla and takes her under his wing.

In the second season, fearing Yennefer's life was lost at the Battle of Sodden, Geralt of Rivia brings Ciri to the safest place he knows, his childhood home of Kaer Morhen. While the Continent’s kings, elves, humans and demons strive for supremacy outside its walls, he must protect the girl from something far more dangerous: the mysterious power she possesses inside.

Based on the bestselling fantasy book series by Polish author Andrzej Sapkowski.