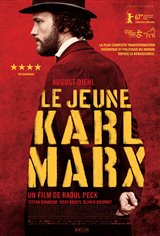 In 1844, Karl Marx (August Diehl), 26, escapes the Prussian police and takes refuge in Paris with his wife Jenny (Vicky Krieps). During heated meetings about protecting the working class, he meets Friedrich Engels (Stefan Konarske), a fellow countryman who is financially supported by his father, a wealthy cotton textile manufacturer. Joining forces and supported by Marx’s wife Jenny and Engels’ girlfriend Mary Burns (Hannah Steele), the two intellectuals shake the trade union movement and come into conflict with the socialist Pierre Proudhon (Olivier Gourmet). Expelled by the French in 1847, Marx and Engels go to London, where they take control of the League of the Just, a utopian socialist secret society, which they rename The Communist League. The following year, they write the "The Communist Manifesto," in which they lay the foundations of the new movement, whose ultimate goal is the international labor revolution.