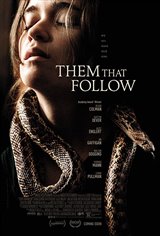 Mara (Alice Englert) — the daughter of Pentecostal preacher Lemuel (Walton Goggins) — lives deep in the wilds of Appalachia. The family's religion rejects modern medicine and instead believes in salvation through the handling of poisonous snakes as proof of their devotion. Mara, who's engaged to Garret (Lewis Pullman), discovers she's pregnant — but the baby is Augie's (Thomas Mann), for whom Mara has strong feelings, despite the fact that he doesn't believe in the local religion.

On the eve of Mara's wedding, Augie's mother, Hope (Olivia Colman), discovers Mara's secret. Augie makes an effort to prove his love for Mara, but it puts his life at risk. With her future at stake, Mara must decide what is most important to her.