There's Someone Inside Your House (Netflix) 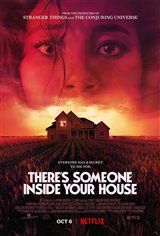 Makani Young (Sydney Park), a teen in her final year of high school, has moved from Hawaii to quiet, small-town Nebraska to live with her grandmother. As the countdown to graduation begins, her classmates are stalked by a killer intent on exposing their darkest secrets to the entire town, terrorizing victims while wearing a life-like mask of their own faces.

Makani finds herself interrogated by the police after the murder of her fellow classmate Jackson Pace (Markian Tarasiuk). With a mysterious past of her own, Makani and her friends must discover the killer’s identity before they become victims themselves.

Based on Stephanie Perkins' New York Times best-selling novel of the same name.