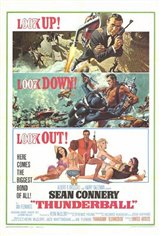 Sean Connery is back as James Bond, whose mission is to find two NATO atomic bombs stolen by the terrorist organization SPECTRE. They are threatening to destroy a major city in England or the United States if they don't get a ransom of £100 million in diamonds.

Bond goes to the Bahamas, where he finds Emilio Largo (Adolfo Celi), the second-in-command of SPECTRE. Aided by CIA agent Felix Leiter (Rik Van Nutter) and Largo's mistress, Domino Derval (Claudine Auger), Bond arms himself with an underwater infrared camera, a distress beacon, underwater breathing apparatus, a flare gun and a Geiger counter as he goes underwater to bring down Largo and his henchmen.