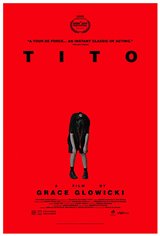 Paralyzed by fear of the outside world, Tito (Grace Glowicki), a traumatized man who wears a whistle around his neck in case of emergency, seeks refuge in an abandoned house. Whenever he ventures outside, he's confronted by predators, so he's gets increasingly frightened of going out.

Starved both for food and a feeling of security, he's becoming overwhelmed by his terrorized existence — until a cheery neighbor, John (Ben Petrie) unexpectedly drops in and tries to get Tito to come out of his shell.