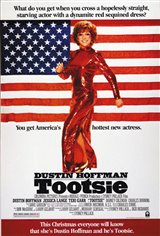 New York-based actor Michael Dorsey (Dustin Hoffman) has a reputation for being a perfectionist, which makes him difficult to work with. When he realizes no one will hire him despite his talent, he gets increasingly frustrated.

That is, until his friend Sandy (Teri Garr), tries out for a role on a popular soap opera and doesn't get it. Michael decides to dress up as a woman and try out for the part himself under the name Dorothy Michaels. He gets the job and soon finds himself a star as audiences relate to his strong female character.