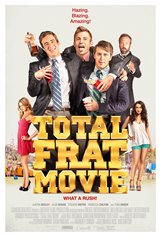 Charlie Martin (Justin Deeley) couldn’t be happier to be the newest member of Alpha Chi Gamma. That is, until the rival Kappas sabotage their celebratory fireworks and the Alpha house is permanently shuttered. Just like that, Charlie’s dream of following in his late father’s footsteps, one of Alpha’s most legendary members, goes up in smoke.

Three years later, a still distraught Charlie discovers a loophole in the school’s rules and presents his evidence to Dean Kravitz (Tom Green). The dean agrees to reinstate the Alphas, but under one condition: get 15 members by the end of rush week. One problem: rush week starts in 24 hours.