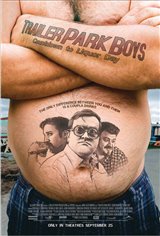 Lahey's a new man, hasn't had a drink for two years. And he has plans—BIG PLANS—for Sunnyvale. Too bad for Lahey that Julian stands in his way. Having the Boys back in the park is too much pressure for Lahey to bear. With his big plans for Sunnyvale going down the toilet, and his relationship with Randy broken down, the countdown to liquor day is on for Jim Lahey.

Meanwhile, Julian's having problems of his own. His business fails and the Boys are forced to resort to doing what they know best—breaking the law. Soon Lahey's descent into the liquor coupled with the Boys descent into crime puts them all on a collision course to destruction.

Canadian Connection: Filmed in Nova Scotia. The director and cast are Canadian.