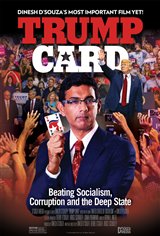 Dinesh D'Souza, who was pardoned by Donald Trump in 2014 after pleading guilty to a felony charge of making an illegal campaign donation, asks if the United States are becoming socialist.

D’Souza talks to people of various races to expose their agendas, including a Jihadist who says the future of America must be Muslim. He alleges that Joe Biden is corrupt. After showing clips of statues being pulled down, demonstations against police violence, and suggesting Democrats are behind all that's wrong with the United States of America, Donald Trump is shown to be a hero, beloved by many.