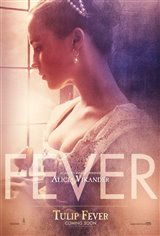 During the tulip mania of 17th century Amsterdam, Dutch artist Jan Van Loos (Dane DeHaan) is commissioned by Cornelis Sandvoort (Christoph Waltz) to paint a portrait of his lovely young wife Sophia (Alicia Vikander). As it turns out, Sophia is not in love with the much older man, but as a young orphan in a monastery with no prospects, felt she had no other choice.

When Sophia and handsome young Jan meet, they fall passionately in love and have an affair that could have very serious consequences for both of them.

Tulip Fever is based on the novel of the same name by Deborah Moggach.