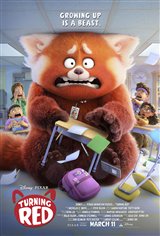 A 13-year-old girl named Meilin (Rosalie Chiang) is a typical middle-schooler. She lives in Toronto and along with her friends, she's really excited about attending the concert of her favorite music group, 4*Town. The only problem is that her mother Ming (Sandra Oh) doesn't like her friends and won't let her go to the concert.

When Meilin wakes up one morning to find she's become a giant red panda, she can't believe her eyes. Although she tries to hide what has happened, she soon discovers her mother isn't surprised, and wants to help her. In the meantime, Meilin keeps turning into a giant red panda whenever she gets excited, which is often.