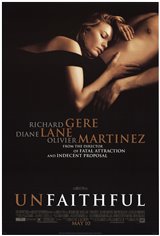 Watch Trailer
Edward (Gere) and Connie (Lane) Summer are a wonderfully-maintained middle-aged couple living the American dream. Together with their eight-year-old son (Sullivan), a dog and a housekeeper, they share an enviable life in the suburbs of New York City. But no life goes unchallenged: This happy marriage, dampened by the routines of affluence, falls prey to an outsider (Martinez) when Connie has a fateful collision with a stranger on a Soho street. It's an encounter which assaults her with mystery, spontaneity, charm - and risk. It will pull Connie into an affair which become her obsession.

When Edward innocently learns that his wife has lied to him, suspicion propels him to uncover the devastating details of her infidelity. Tormented by the knowledge, he confronts her lover, only to discover a rage within himself that he could never have imagined.