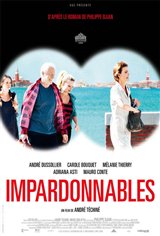 Francis, a successful crime novelist, arrives in Venice, looking for a place to stay while he works on his next book. Real estate agent Judith shows him an isolated house on an island. Francis, who falls instantly in love with her, agrees to rent the property but only if she'll move in with him.

The two get married 18 months later and live together on the island. Married life is blissful for Francis, but it brings with it one very big problem—he's got a bad case of writer's block. Meanwhile, his addict daughter Alice visits with her 10-year-old daughter and then promptly disappears.

Months later, Francis has not gotten over his writer's block. Judith's absence due to her busy work schedule during peak season put a strain on their relationship, leaving Francis to wonder if she's having an affair.