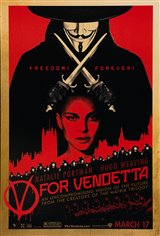 Set against the futuristic landscape of totalitarian Britain, V For Vendetta tells the story of a mild-mannered young woman named Evey (Natalie Portman) who is rescued from a life-and-death situation by a masked vigilante (Hugo Weaving) known only as "V."

Profoundly complex, V is at once literary, flamboyant, tender and intellectual, a man dedicated to freeing his fellow citizens from those who have terrorized them into compliance. He is also bitter, revenge-seeking, lonely and violent, driven by a personal vendetta.

In his quest to free the people of England from the corruption and cruelty that have poisoned their government, V condemns the tyrannical nature of their appointed leaders and invites his fellow citizens to join him in the shadows of Parliament on November the 5th – Guy Fawkes Day.

On that day in 1605, Guy Fawkes was discovered in a tunnel beneath Parliament with 36 barrels of gunpowder. He and his co-conspirators had engineered the treasonous “Gunpowder Plot” in response to the tyranny of their government under James I. Fawkes and his fellow saboteurs were hanged, drawn and quartered, and their plan to take down their government never came to pass.

In the spirit of that rebellion, in remembrance of that day, V vows to carry out the plot that Fawkes was executed for attempting on November 5th in 1605: he will blow up Parliament.