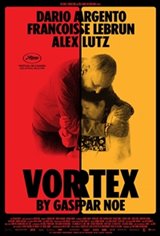 Lui (Dario Argento) and his wife Elle (Françoise Lebrun) live together in a small apartment in Paris. Lui, who has a heart condition, is working on a book about movies titled Psyche and Elle is a retired psychiatrist who suffered a stroke a few years ago. Their adult son Stéphane (Alex Lutz), the father of a small boy, is unable to help them out, due to his own problems with money and drugs, amidst a failing marriage.