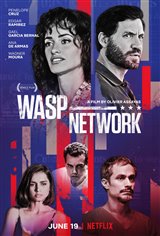 Cuban pilot Rene Gonzalez (Edgar Ramirez) leaves his wife, Olga Salanueva (Penélope Cruz), and young daughter as he steals a plane and heads to Miami, seemingly to defect to the United States from Cuba. Their friends believe he's a traitor.

But in reality, he hasn't defected. Instead, he joins forces with a group of exiles known as the Wasp Network, working to infiltrate anti-Castro organizations.