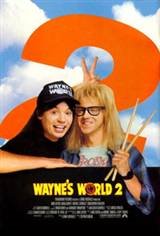 Everyone's favorite headbangers from Aurora, Illinois, are back in this sequel to the 1992 hit comedy Wayne's World. The success of their TV show allows Wayne Campbell (Mike Myers) and Garth Algar (Dana Carvey) to finally move out of their parents' homes, but now they have to figure out what to do with their lives.

Wayne's girlfriend, up-and-coming rock star Cassandra (Tia Carrere), is enjoying a career boost thanks to her new manager Bobby Cohn (Christopher Walker), but Garth thinks that Bobby is more interested in her body than her place on the charts.

Meanwhile, Wayne is visited in a dream by the late Jim Morrison (Michael A. Nickles), who convinces him to promote a massive rock festival, Waynestock, featuring Aerosmith as headliners. Garth, on the other hand, is finally relieved of his pesky virginity by femme fatale Honey Hornee (Kim Basinger), though it turns out that Honey has a hidden agenda.