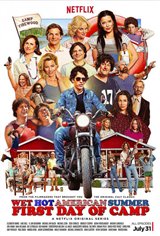 Remember Wet Hot American Summer, which took place on the last day of camp in 1981 at Camp Firewood? This Netflix original series takes place on the first day of camp in 1981, and brings back almost the entire cast from the movie, including A-List stars such as Paul Rudd, who plays a teenage counselor and Bradley Cooper, who along with Amy Poehler, play the over-enthusiastic musical directors who try to put on a show despite the lack of talent at Camp Firewood.