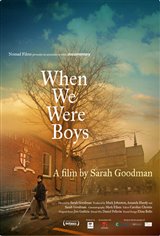 At an elite private boys' school, students make and lose friends, create a pecking order, and begin their individual paths to manhood. The adolescent culture of boys lies beneath the surface, an emotional world often unspoken to each other or to the adults around them. The boys and the adults sometimes seem to exist on separate planes. 'To whom much is given, much is expected' is impressed upon this privileged group, but their thoughts are elsewhere.

In the schoolyard they are still boys—throwing snowballs at each other and roughhousing. They whisper at the back of the class and run through the halls when they should be studying. In the choir, their voices are beginning to crack, and in the cafeteria the conversations turn more and more to girls. One moment, they seem like children, the next like the men they will become. The film gradually centers on the friendship of two boys—Noah and Colin—best friends since grade school. Noah is a sincere, polite boy, the star of the choir; Colin is a charming troublemaker who makes the choirmaster's life difficult.

Colin and Noah hang out at each other's houses as a matter of course, but as adolescence kicks in their differences become magnified and they drift apart. Meanwhile, school life goes on: there is the spring dance; grade eight graduation; a class trip to Spain; summertime diversions. Grade nine begins, and Colin seems more interested in his new friends. They study 'Lord of the Flies' in English class, while in the lunchroom Noah becomes the odd man out. The boys are defining themselves in contrast to each other: Who is cooler? Who is doing what? Who is growing up faster? As the film progresses, Noah seeks other friends beyond Colin's circle.

As they grow into young men their paths become more solitary. Childhood seems to be fading away. But something changes in Grade 10, and When We Were Boys returns one year later to a surprisingly poignant resolution between Noah and Colin.