When You're Strange: A Film About the Doors 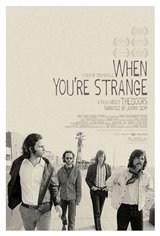 Using footage shot between The Door's 1965 formation and lead singer Jim Morrison's 1971 death, WHEN YOU'RE STRANGE, narrated by Johnny Depp, follows the band from the corridors of UCLA's film school, where band member Ray Manzarek and Morrison met, to the stages of sold-out arenas. It uncovers historic and previously unseen footage of The Doors and provides new insight into the revolutionary impact of the illustrious rock quartet's music and legacy.