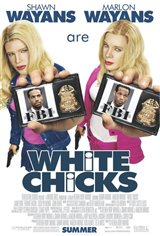 Despite their best efforts, agents Marcus and Kevin Copeland (Marlon and Shawn Wayans) have worked their way down to the bottom of the FBI food chain. Their most recent bust was a failure and they are hanging on to their jobs by a thread. When a plot to kidnap spoiled socialite sisters Brittany and Tiffany Wilson (Maitland Ward and Anne Dudek) is uncovered, the big case is given to Marcus and Kevin's rivals Vincent Gomez and Jake Harper. To add to their humiliation, Kevin and Marcus are handed a thankless menial task - to escort the Gucci-clad spoiled brats safely from the airport to their hotel in the Hamptons.

When Tiffany's pampered pooch causes a traffic mishap, the two women are disfigured - well, if you call a fat lip and a cut nose disfigurement, which to these looks-obsessed socialites it certainly is. The heiresses refuse to show their less-than-perfect faces at the important society weekend fearing they could lose the highly coveted cover of Hamptons Magazine.

Faced with the prospect of unemployment, Kevin and Marcus go undercover as the demanding divas and in the process, try to snare the kidnappers and restore their reputations.