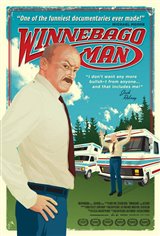 WINNEBAGO MAN reveals the story of Jack Rebney, an unlikely folk hero whose outrageously funny outbursts were caught on tape during the making of a Winnebago sales video in 1988. The outtakes reel mysteriously circulated on dubbed VHS tapes for years before turning into a full-blown Internet phenomenon on YouTube in 2005. Today, the "Winnebago Man" has been seen by more than 20 million people worldwide and is regarded as one of the first and funniest viral videos. Filmmaker Ben Steinbauer sets out on the seemingly impossible task of tracking down Rebney, who has been living a hermit-like existence on a mountain top, and until recently, had no idea that the outtakes even existed. Rebney turns out to be more intelligent, sharp-tongued and charismatic than anyone could have imagined—in short, he's a star. WINNEBAGO MAN is a smart, funny and unexpectedly poignant tale of one man's response to unintended celebrity.