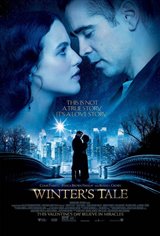 When his immigrant parents are denied admission at Ellis Island, Peter Lake is set adrift in New York Harbor in a model boat. He's rescued by the Baymen of the Bayonne Marsh and sent off to Manhattan when he becomes of age.

Peter (Colin Farrell) struggles to support himself and eventually becomes a burglar. When he makes an enemy of a gangster named Pearly Soames (Russell Crowe), he's rescued by Athansor, a white horse who can fly.

While robbing a house, Peter meets a young woman named Beverly (Jessica Brown Findlay), who's dying of consumption. The two form a special bond and his love for the free spirited woman leads him to become obsessed with justice.

Based on the 1983 fantasy novel by Mark Helprin.