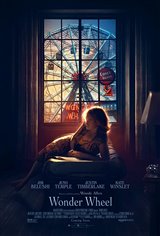 Watch Trailer
On a crowded Coney Island beach in the 1950s, lifeguard Mickey Rubin (Justin Timberlake) dreams of becoming a playwright. Carolina (Juno Temple) arrives at the amusement park, looking for her father. She meets Ginny (Kate Winslet), who doesn't know at first that her carousel-operator husband, Humpty (James Belushi), is the girl's father.

The frightened Carolina tells Ginny and Humpty she knows secrets about murders, and fears she'll be targeted by gangsters, because she knows where bodies are buried. They take her in, but Ginny worries that the girl's presence will put them all in danger.