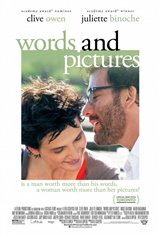 An English teacher (Clive Owen) who's also a writer is having a dry spell. He challenges the school's new art teacher (Juliette Binoche), who is having difficulty of her own as her arthritis affects her ability to paint, to a "war" between words and pictures, in which the students have to decide which is more powerful. In the process, an unlikely romance begins.

Canadian Connection: Filmed in Vancouver. Some of the cast members are Canadian.