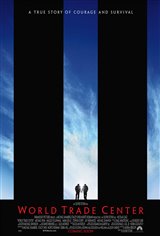 Watch Trailer
September 11, 2001 was an unusually warm day in New York. Will Jimeno, an officer with the Port Authority Police Department, was tempted to take a personal day to enjoy his hobby of bow hunting, but ultimately, decided to go to work. Sergeant John McLoughlin, a respected veteran of the PAPD, had been up for hours—a requirement of his daily, 1½-hour trek to the city. They and their colleagues made their way to midtown Manhattan, just like any other day. Only this wasn't any other day.

A team of PAPD first responders drove from mid-town Manhattan to the World Trade Center. Five men, including McLoughlin and Jimeno, went into the buildings themselves and were trapped when the towers collapsed. Miraculously, McLoughlin and Jimeno survived, but were buried and pinned beneath slabs of concrete and twisted metal, 20 feet below the rubble field. Though they couldn't see each other, each could hear that the other had survived, and for the next 12 hours, they kept each other alive—talking about their families, their lives on the force, their hopes, their disappointments.