Year of the Carnivore 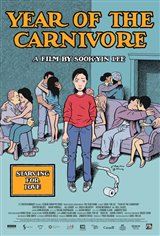 Sammy Smalls (Cristin Milioti) is a 21-year-old tomboy who works as a store detective at Big Apple Food Town. Her job is to deliver shoplifters to her boss, who beats them up so they never re-offend. Sammy feels guilty over her part in the dodgy scheme and wants to quit, but she doesn't have many options. She certainly isn't moving back home to live with her unhappy and over-protective parents.

Meanwhile, Sammy is head over heels for scruffy street musician Eugene Zaslavsky (Mark Rendall). He's perfect for her, funny, irreverent and sensitive, but the problem is, he doesn't want to be in a relationship. After a disastrous one-night stand that goes beyond the boundaries of their friendship, Eugene suggests they play the field to get more experience. Following his advice, Sammy hatches a plan catapulting her on a quest that takes her through her neighbors' bedroom, the public swimming pool, and finally to blackmailing shoplifters into giving her sex lessons in the woods behind the supermarket.

Canadian Connection: Filmed in British Columbia. The director and most of the cast members are Canadian.